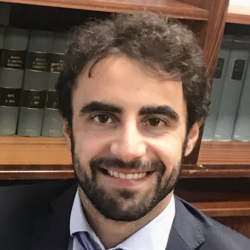 Mr. Gian Marco Bovenzi, Attorney, was born in Rome, Italy, in November 1989. He achieved cum laude his Masters’ Degree in Law at the University of Rome “Tor Vergata” (2014), discussing a thesis in compared criminal procedure law with title “The safeguard of personal liberty in Italy and in the United States”. He participated to the European Union Erasmus program in Paris, at the University of Paris XII (2010/2011). He further achieved a post-graduate Masters’ Degree in Forensic Sciences at the University of Rome “La Sapienza” (2018), an LL.M. in American Law at the Syracuse University College of Law (New York, United States, 2019), and a post-graduate Certificate of Advanced Studies in Counterterrorism and National Security at the Institute for Security, Policy and Law (Syracuse, New York).

He worked as an intern at the United Nations Office for Drug Control and Crime Prevention (Wien, 2015) and as a law clerk for the Italian Department of Justice (2016/2017).

Admitted to practice law in 2017, he currently collaborates with the Luigi Einaudi Foundation in Rome.