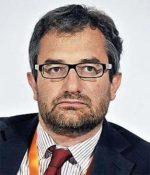 Luca Bianchi was born in 1968. He graduated in Economics and Trade from the Sapienza University of Rome, and he has been the author of numerous scientific publications on various topics related to development policies.
He is an expert in territorial development strategies and a researcher for over a decade at Svimez (Association for the Development of Industry in Southern Italy), where he served as Deputy General Manager.
Bianchi has collaborated for several years with various Institutional Bodies as an economics and development policy expert (from 2007 to 2008 he was an economic consultant for the Deputy Minister of Economic Development).

Along the years, he has also carried out consulting services for Confindustria and the Department for the Presidency of the Council; he also acted as a consultant for the Parliament’s Anti-Mafia Commission. In 2102 he was appointed as a Councilor of the Sicilian Region Economy, where he remained until 2014. He currently holds the position of Head of the Department of Competitive Policies, agri-food quality, horse racing and fisheries of the Ministry of Agriculture.