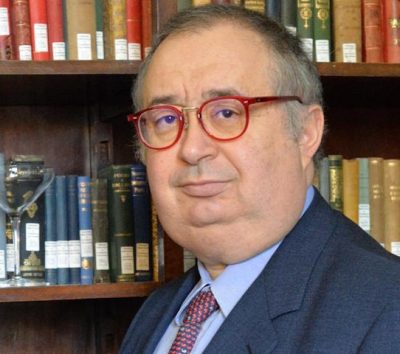 He pursued a Masters’ Degree in Law at the University of Messina.

Currently, he is a well-known lawyer specialized in criminal law, and he is entitled to practice law in front of the Italian Supreme Court of Cassation.

He is a publicist journalist, member of the National Council Order of Journalists since May 28th, 1997.

He is the President of the Luigi Einaudi Foundation.

He is the Honorary President of “Famiglia Piccolo di Calanovella” Foundation.

He taught Constitutional Law at the LUM University, as Professor.

During his professional career, Giuseppe Benedetto held many distinguished roles:

He also held important roles as a public Administrator: member of the Regional Council and Cultural Minister at Abruzzo Region for the Liberal Party; Deputy leader of the Liberal Party for the city of Pescara; national vice-secretary of the Italian Liberal Youth; member of the National Direction and Excecutive, where he was National Responsibile for Local Organisms.

He does not hold any elective political role since 1995.

Passionate about social problematics, his scientific and political activism has always reflected his beliefs in the safeguard of civil rights, in the development of a substantially secular culture – but without being “ideologically” secular; and in the fundamental rights of every citizen against oppression, even when perpetrated by the governments themselves.

Among his Maestros – with whom he had intense and friendly relationships – important politicians such as Giovanni Malagodi and the expert in constitutional law Aldo Bozzi.