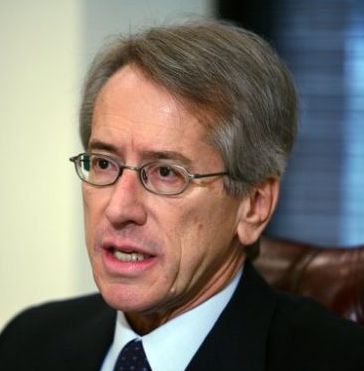 Giuliomaria Terzi di Sant’Agata (Italian pronunciation: [ˈdʒuːljo ˈtɛrtsi di sanˈtaːɡata]) (born 9 June 1946) is an Italian diplomat who was Italy’s Minister of Foreign Affairs from November 2011 until 26 March 2013. From August 2008 to September 2009 he was Permanent Representative of Italy to the United Nations in New York, where he also headed the Italian Delegation to the United Nations Security Council, which Italy had joined as non-permanent member for the 2007-2008 term. He then served as Italy’s ambassador to the United States from 2009 to 2011.

Terzi earned a degree in Law at the University of Milan, specializing in International Law.

Born in Bergamo, Terzi is a career diplomat. He joined Italy’s foreign service in 1973. In 1975 he was posted as Secretary for political affairs at the Italian Embassy in Paris. After returning to Rome in 1978, as Assistant to the Secretary General, he was appointed to the Italian Embassy in Canada as Economic Counselor from 1890 until 1984, a period of sharp growth in economic and high-tech cooperation between Italy and Canada. He was then Consul General in Vancouver during Expo 86, the assigned to the Economic Affairs Department at the Ministry, and later on to the Human Resources Department , to NATO in Brussels in 1990 as First Counselor for Political Affairs at the end of the Cold War, during the German reunification, and the first Gulf War.

From 1993 to 1998, Terzi was assigned to the Permanent Mission of Italy to the United Nations in New York as First Counselor for Political Affairs and later as Minister and Deputy Permanent Representative. During a period marked by the Bosnian Wars, the Somali’s State disruption, as well as conflicts in the African Great Lakes region Italy was for a biennium elected member of the Security Council and led an active campaign to reform the UN Security Council in which Counselor Terzi was especially involved, as he was on issues concerning Uman Rights , fundamental freedoms, and Sustainable Development By the mid-nineties globalisation and new challenges to international security underscored the need for major reforms of the UN bodies, a cause that Italy championed in all the UN fora.

Terzi served as deputy secretary general of Italy’s Ministry of Foreign Affairs in Rome, Director General for political affairs and human rights, and Political Director. His responsibilities included major international security and political issues, especially in the framework of the UN Security Council, the UN General Assembly, and the UN Council on Human Rights, as well as the Council of the European Union, NATO, the G8, and OSCE. He also advised the Italian Foreign Ministers on international security, focusing on the Western Balkans, the Middle East, Afghanistan, East Africa, nuclear proliferation, terrorism, and human rights.

His later posting were ,as Italian Ambassador, to Israel (2002–2004),during a period characterized by the outbreak of the Second Intifada, by improved relations between the EU and Israel during the Italian Presidency of the EU (July–December 2003), and commitment in principle by Israel and the Palestinian Authority to the peace process on the basis of the Road Map.

Transatlantic relations, international security, crises management, peacekeeping operations, development and human rights have been the priorities on Amb. Terzi’s agenda as Permanent Representative to the United Nations in New York from 2008 to 2009, during the Italian mandate in the UN Security Council.

As Ambassador to the United States until November 2011 Amb. Terzi worked on further strengthening bilateral cooperation in international security as well as in economic, cultural and scientific matters. He launched a country wide‎ strategy with hundreds of events and programs to promote Italian culture, science and language. ‎The “2013 -Year of the Italian Culture in the USA” was the main outcome of these efforts, together with the inclusion of Italian among the main foreign languages in American schools certified by the Advanced Placement Program.

From November 2011 until March 2013 Amb. Terzi was Minister for Foreign Affairs.

He is active in political and academic life on foreign policy, European affairs, crises management, international security.He is member of the Advisory Board of United Against Nuclear Iran. Since March 2016 Amb. Terzi is President of the “Global Committee for the Rule of Law – Marco Pannella ” for the promotion of the Rule of Law and fundamental Freedoms .

On November 16 2011 was appointed Minister of Foreign Affairs of Monti’s government. During his tenure, he held 1,483 meetings and events, which covered 91 different countries with 75 official visits abroad and 138 meetings with other foreign ministers, of which 63 in Italy and 75 overseas.

He was member of the “Westervelle Group”, composed by 11 European Foreign Ministers and aimed at supporting initiatives for “More Europe” in the European political integration process. He actively promoted UN moratorium on the death penalty resolution and other campaigns for human rights and fundamental freedoms. Within the EU and NATO Minister Terzi was a strong advocate for a renewed “Pratica di Mare” partnership with the Russian Federation in order to settle energy and Rule of Law issues, as well as European security concerns raising from East-West diverging positions on conventional and nuclear forces. He gave impulse to policies of diversification of energy supplies to Italy, by negotiating and signing during the 2012 UNGA in New York the Memorandum of Understanding (MoU) for the Trans Adriatic Pipeline (TAP) between Albania, Greece and Italy, by strengthening relations with transitional Governments in Libya, and enhancing economic cooperation with Mozambique, Angola and Algeria. He pursued a reinforced Mediterranean political and economic cooperation in the Mediterranean region in the “5+5 Dialogue” framework , with Spain, France, Italy, Malta Portugal, Libya, Morocco, Mauritania and Tunisia, and other bilateral and multilateral initiatives through the EU, NATO and the UN. At the same time Minister Terzi did strive for a closer EU political, economic, and scientific cooperation with Israel and for the reactivation of the MEPP on the base of the two States solution. During his tenure Minister Terzi engaged in a more active Italian diplomacy for the Horn of Africa, by visiting and signing new agreements with Ethiopia and Somalia.

The seizure by India of two Italian Marines in international waters off the Kerala coast on 16 February 2012 over an alleged incident and the death of two fishermen which India claimed had involved the Italian tanker “Enrica Lexie” and its Military Protection Unit , while on official duty in the framework of international anti-piracy activities , did cause a dispute between India and Italy on jurisdiction.

The dispute was brought by the Italian Government to the UN, EU, regional and global fora , and discussed at bilateral and multilateral level with India, with the intent of settling the dispute trough the arbitration procedure established by the United Nation Convention on the Law of the Sea (UNCLOS), to which both Italy and India are signatory parts.

Having India formally rejected all Italian proposals for convening UNCLOS Arbitration, Minister Terzi on 11 March 2013 announced – on behalf of and in agreement with the government  – that the two Italian marines, Massimiliano Latorre and Salvatore Girone – who had meanwhile been send back to Italy having obtained from the Indian authorities a “temporary leave” to exert their electoral duties – would not have left the country to return to India until the Arbitration established by UNCLOS decided on the matter of jurisdiction.

The Indian reaction and concerns for the loss of Defense Procurement , already investigated by the Italian and Indian Courts, led some members of PM Monti’s Government next March 22 to insist for a complete reversal of the previous decision announced by Italy on 11 March. Prime Minister Office -“Palazzo Chigi” – announced then the decision to send the two riflemen back to India. Such a sudden change of Government’s strategy was severely criticized and rejected formally in writing by the Foreign Minister. While Mr. Terzi was awaiting for clarifications from the PM Monti, he momentarily uphold his resignation.

Three days later ,on March 26, 2013 – as soon as the plenary session of the Chamber of Deputies reconvened to discuss the latest developments on the case – Minister Terzi announced in Parliament his resignation because of his dissent with the position of the government which had reversed a previously agreed decision of keeping the two Marines in Italy until the UNCLOS Arbitration would have deliberated on the matter of jurisdiction. The following day, PM Mario Monti, assumed the interim as Foreign Minister.

Terzi’s resignation has been criticized by PM Monti, who told the Chamber of Deputies that Mr. Terzi would never had – before that day – expressed his own dissent or expressed his intention to resign.

According to PM Monti, Terzi’s resignation was aimed at achieving “other results that will soon become more evident”.

Terzi immediately contested PM Monti’s innuendos publicly, reiterating in various interviews and articles reasons and facts which had led to his resignation.

On 29th March 2013 Terzi unveiled during a TV interview the heavy pressures he had received in order to give his consent to the return of the two Italian marines to India. Pressures that he firmly refused, since the Marines return to India before the UNCLOS Arbitration would have infringed principles and norms enshrined in the Italian Constitution.